Shikigami no Shiro II was originally released for the arcade on the SEGA NAOMI platform. It was also released on the PC, Playstation 2, and Xbox.

The American release of the PS2 version, while having horrible dubbing, was overall an improvement over the first game's release.  In-game vocal effects were left intact, and the gameplay was preserved. 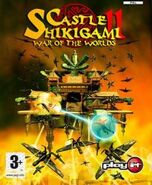 Games in the in the Shikigami no Shiro series
Community content is available under CC-BY-SA unless otherwise noted.