In the games were she was playable, her normal attack was to fire an series of multi-directional cards, with the middle rows becoming red during High Tension. In her shikigami attack, she uses a "light raven god" named Yata which circles around her, while her bomb was a screen-kill attack.

A Shinto shrine maiden with designs on Kohtaro. Sayo appears to be investigating the murders at the request of another. She attacks with spiritual wards.

Born into a family of shinto priests whose lineage can be traced back over 500 years, yuuki is a 16-year-old shrine maiden at Yonchounyotai shrine, who is the strongest wielder of divine power today.

Kept away from the world at large including school, she is a perfect example of the virtues of ancient Japan but is slightly out of touch with society at large. Using Yata, a 'light raven' god who dwells in the shrine archway, she is an expert at battling demons.

She arrives alone in Tokyo, having taken the train from the mountains of Hida at the behest of someone she couldn't refuse.

A shrine maiden from a strong religious home, she has never gone to school due to her upbringing. The new incidents have caused her to leave by train, and come to Tokyo. Sayo's special still consists of her raven familiar Yata. It can either attack in a wide, slow radius(shown) or with a narrower(and faster) one.

Sayo Yuuki has taken the place of the deceased Sazae as Kohtaro Kuga's Shikigami, to save her own life. While Sayo's new look is the result of her taking Sazae's role, she can also be used with her original appearance from the earlier games. 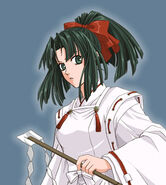 Sayo Yuuki, as she appears in Shikigami no Shiro II.
Add a photo to this gallery

A normal Sayo, in Sazae form.

Sayo blushing and looking in a different direction.

Sayo turns her face away in frustration.

A shocked Sayo.
Add a photo to this gallery

A normal Sayo, in her original form.
Add a photo to this gallery

Characters in the Shikigami no Shiro series
Retrieved from "https://shikigaminoshiro.fandom.com/wiki/Sayo_Yuuki?oldid=4795"
Community content is available under CC-BY-SA unless otherwise noted.