Reika "Time Gal" Kirishima is a major character in the Shikigami No Shiro series. She first appeared in Shikigami no Shiro III, but was originally from the laserdisc arcade game known as Time Gal. She serves as the mascot for the Nintendo Wii version, being featured on the box artwork for all regional versions. She wears a brown cap, a red vest, a white camisole, socks as gloves, a white and red skirt with brown lace, black boots and black and orange leg warmers.

Reika's signature attack is, using two large sapphire diamonds, firing large halos at enemies. During High Tension, the rings become red and larger. Reika's shikigami attack is using the diamonds to fire an continuous stream of bullets, which can either, by the player's choice, stay straight, or travel in multiple directions. Reika's bomb is "Time Stop", which allows her to freeze all movement on-screen except for herself (and the other player in two-player mode), and destroy enemy bullets by shooting at them.

Reika is a police officer from the distant future, she has traveled to the past at the request of her boss (none other than Fumiko Odette Van Stein) to help solve the mysteries of Alcaland. She's flirty, generally cheerful as she giggles and skips through danger, dolling out little quips occasionally and does some shrieks of panic when in distress. Known to most as "Time Gal", Reika is as careless as she is carefree, and tends to cause more problems than she solves.

Reika, shown on the character select menu.
Add a photo to this gallery 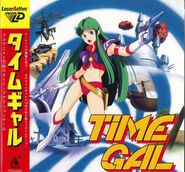 Reika as she appears in Time Gal.
Add a photo to this gallery

Characters in the Shikigami no Shiro series
Retrieved from "https://shikigaminoshiro.fandom.com/wiki/Reika_Kirishima?oldid=4753"
Community content is available under CC-BY-SA unless otherwise noted.