Kohtaro Kuga (玖珂 光太郎 Kuga Kohtarou, sometimes shortened to Ko) is the main protagonist of the Shikigami no Shiro series, appearing in every installment in the series to date. His shikigami was once a woman named Sazae, but in Shikigami No Shiro III, his shikigami is now Sayo Yuuki. He has an older brother known as Shintaro Kuga.

Kohtaro's basic attack is firing a series of bullets, in groups of four, at enemies. When exposed to High Tension, the bullets instead travel in groups in five and colored bright red. Kohtaro's shikigami attack is summoning Sazae or Sayo to attack either nearby enemies, or enemies in an specific pattern (Usually in the order they appear on-screen). Kotaro's bomb attack is causing an massive explosion which will destroy most enemies surrounding him, as well as every enemy bullet on-screen.

Kohtaro is a detective with the Metropolitan Police, assigned to the case. His special attack uses a spiritual familiar named Sazae who accompanies him everywhere, whether he likes it or not. He works at the H&K Detective Agency with Gennojo Hyuga.

Kohtarou is always on the phone with Yama-san, a detective on the verge of retirement and constantly arguing with Sayo Yuuki since they started investigating the case together.

He is never unprepared, always carries a full load of o-fuda; paper talisman used to fight off evil and uses 'Zasae-san', his faithful man-eating ghost to drive enemies into preset traps (bombs) and blow them up.

The principal character of the series, a private detective of H&K Detective Agency, returns. His Shikigami, Sazae, is still in tow. He has a personal stake in the battle, as his brother, Shintaro Kuga appears to be in charge of the New World Order.

The hero of the series. Due to the longtime death of his shikigami, Sazae, he has come back weaker than before. He still makes the mistake of calling out Sazae and causes blunders of those around him. This is the story of his rise back from his loss. He has grown taller, and sadness and frustration have cast a shadow around him. But once an incident occurs, he takes action more passionately than before. He has gotten rid of his school uniform and appears in a cool new outfit chosen by Fumiko. He also works as a translator and interpreter.

Offical artwork of Kohtaro from the original Shikigami no Shiro. 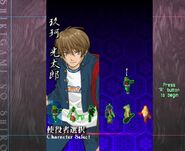 Gameplay featuring Kohtaro.
Add a photo to this gallery 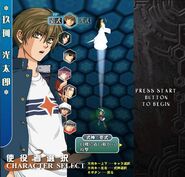 Kohtaro and Sazae on the character select screen in Shikigami II.

Kohtaro and Tsukiko shown in a manga cover.
Add a photo to this gallery

Kohtaro in a joyful conversation

Kohtaro looking away in frustration or embarrassment.

Kohtaro preparing for a fight.

Kohtaro when he is shocked or scared.

A defeated Kohtaro with a torn up outfit and browses on his face.
Add a photo to this gallery

Characters in the Shikigami no Shiro series
Retrieved from "https://shikigaminoshiro.fandom.com/wiki/Kohtaro_Kuga?oldid=4800"
Community content is available under CC-BY-SA unless otherwise noted.