Fumiko's basic attack is a stream of ice shards that are steerable by moving. Fumiko's shikigami attack is either causing an small explosion or creating an series of lightning that attacks enemies. Fumiko's bomb is an incredible screen-kill attack, which causes multiple explosions that cover the screen.

In Shikigami no Shiro II, an alternative form of Fumiko, known as Chibi Fumiko, was available.

A half-German half-Japanese witch. The rise of the Nazi Empire forced her family's movement to Japan, where she's resided ever since. Fumiko is also quite wealthy, and is usually accompanied by her butler, Munchausen. Munchausen's aerial bombings are the form of her special attack. He usually has a different costume with each appearance.

Half-Japanese German-born witch, she is said to be the descendant of a Nazi officer who fled to Japan during the fall of the Third Reich, Fumiko currently lives a quiet life, helping her guilt-ridden, wheelchair-bound grandfather.

She is not talkative, wears glasses, and braids her hair. She is the type of girl who wants to work for the good of mankind and is saddened when she can't.

Riding her magic broom at breakneck speeds, garbed in all black with a red Jolly Roger armband, she's a Panzerfaust-wielding military-loving witch who battles the supernatural ills plaguing the secular Japan using the Eye of Ethiopia, a magical weapon excavated by the Germans.

The witch with the golden gun returns, and she still intends to marry Kohtaro. A German who migrated to Japan, she follows Kuga's trail to put a stop to the events before they can harm her would-be husband. Her Shikigami attack consists of orbital bombardments summoned by Munchausen, her butler. He can either bring down one massive blast, or a smaller assortment of five connected blasts.

A gorgeous witch, in many different ways.

She is said to be more of a villain than the greatest enemy in the series. Her hobby is to steal the men from other women. Her second hobby is trampling upon people.

She has arrived in Alcaland to return to her homeland - and go on a honeymoon.

For Fumiko, Alcaland is a memorable place she visited a number of times when she was a young girl. She looks around her surroundings with fond memories and can't help but feel melancholic.

Artwork from the Shikigami no Shiro box, showing Fumiko and Kim De John.
Add a photo to this gallery 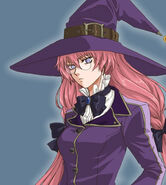 Fumiko's appearance in Shikigami II.
Add a photo to this gallery

Fumiko with a sneaky/mischievous look, often shown when she is pleased and/or happy.

Fumiko when she is upset or serious.

Fumiko in her police uniform.

Fumiko in her police uniform, acting upset or serious.
Add a photo to this gallery

Characters in the Shikigami no Shiro series
Retrieved from "https://shikigaminoshiro.fandom.com/wiki/Fumiko_Odette_Van_Stein?oldid=4797"
Community content is available under CC-BY-SA unless otherwise noted.